Donald Trump Jr. and Eric Trump are lowlifes who kill precious animals for sport, or for trophies. Big smiles all around while holding dead animals they senselessly killed. Hoping karma whoops them in the ass!

There is a video advertisement that was out before Trump won the election, on Dailymail here, check it out, showing all these republicans pushing out support for Trumps, including: Mark Geist, Michael Waddell, Ted Nugent, Tiffany Lakosky, Ronnie “Cuz” Strickland, Keith Mark, Jason Hairston, Julie Kreuter, Sean Hannity, Kris Kobach, mostly all losers imo.

He’s also having a charity even that allows investors and donors the ability to trophy hunt with the Trump brothers, able to kill bald eagle, grizzley bear, elk, and many more 🙁

More about it here and here

John Weatherby takes part in Trophy Safaris, he is a perfect example of what I believe is a form of child abuse. He is teaching his 7 year old daughter to murder zebras, gazelles, impalas as you can see in the pictures below…..

Then there are people like New Zealander Johnny Yuile who shared a picture of his daughter who he forced to eat a deer heart after murdering and slaughtering it. 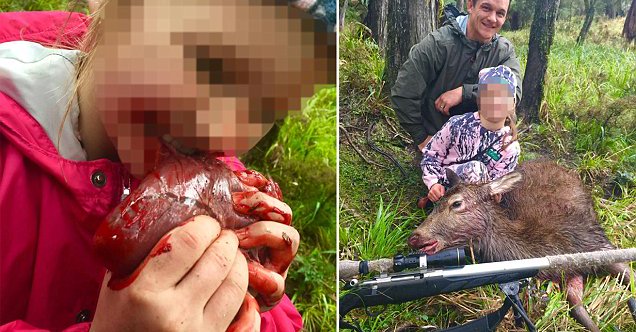 How is this not already labeled as child abuse?

No words to describe how sick this f*cker is

Read the article about this scumbag here.

Are you a trophy hunter? are you beating your wife or children or pets? well chances are, if you are one, then you are also the other. (not to mention trophy hunters, and animal abusers are more prone to become molesters, rapists, and murderers).

If you are a trophy hunter, psychologically means you are very self conscience about your manhood. You have not been able to “prove to dad” that you know how to become a man, etc etc. Trophy hunting means you are so gay, that you have to display “manly kills” on your wall. As if your voice, attitude, etc are not enough.

Gayness, totally cool and many friends I have are gay, no disrespect to homosexuals with this post.

Some famous examples of trophy hunters are Jimmy John Liautaud, owner of the Jimmy Johns sandwich franchinse, Eric & Donald Trump Jr., and Bob Parsons, the founder and CEO of Godaddy.

Are you gay? if yes, then you are gay. Awesome!

Are you a trophy hunter? if yes then you are also super gay. One study shows that 87% of trophy hunters are closet homosexuals.

The more you prove your trophies, the more homosexual you are. Think about it.

Virunga National Park in the Democratic Republic of Congo has a lot of beautiful & endangered animals. The true heroes are there, in ranger uniform gaurding these endangered mountain gorillas. Men like Jean Claude Kiza Vunabandi who was killed on October 25th, 2015, and 100’s more rangers there who’ve been killed defending these beautiful innocent animals in the past years.

If you get the chance, watch the 2014 documentary “Virunga”, the films motto is awesome! It is “Conservation is war”.

Read more about there great animal rights saviors at this CNN article here.

April of this year, a Texas licensed veterinarian posted a horrific photo on Facebook of herself, holding a cat dangling from an arrow, an orange and white tabby cat she shot through the head with a bow and arrow with the caption, “My first bow kill lol. The only good feral tomcat is one with an arrow through it’s head. Vet of the year award…gladly accepted”.

The photo went viral and days later Lindsey was fired from her job at the Washington Animal Clinic in Brenham.

The “feral tomcat” was a beloved, family pet named “Tiger”.

The investigation into this animal cruelty case has been ongoing for over 2 months, and the National outcry for justice is deafening.

We may have lost the fight on the 24th but the battle is not over. The Press Release the DA submitted to the public raises many questions and we are here to ask for answers to those questions. Please read the press release.

There are over 375,000+ signatures on petitions pressuring the Texas Board of Veterinary Medical Examiners to revoke Lindsey’s medical license.

Please join us in our fight for #JusticeForTiger, moving forward.

Watch the brave protesters in this KBTX news video standing up for Tiger “the feral” cat, and animal rights in general. Watch the KBTX video here.

Kristen, a comment from my own mouth, “you are a huge fcking coward!”

Jimmy John Liautaud is just another shithead that has been exposed for his trophy hunting in Africa. He went trophy hunting and slaughtered, murdered, everything from elephants, leopards, bears, and he is so heartless that he even murdered endangered species like rhino’s!

I learned of Jimmy John and his trophy hunting, i will NEVER eat at Jimmy Johns again. I will also spread the word about this the best I can. This disgusts me about you Mr. Liautaud.

This asshole had the nerve to mention the word “humanity” in his recent interview with Minneapolis Star Tribune. He says:

“This has been especially hard on my wife and my daughter,” he told the AP and Star Tribune. “They’ve been threatened in the social media, and again … I don’t understand that level of humanity to come after people not involved at all.”

In all honesty, I don’t believe people should be directing any insults or attention to his wife or family, I think the full responsibility falls on Palmer.

Pretty ironic that a major douchebag like Walter Palmer has the nerve to discuss, critique or even mention the word “humanity” after his murderous life is now on display for anyone to see. His illegal killing of bears, his shooting, tracking, killing, skinning and beheading of Cecil the Lion in Zimbabwe in July. In my opinion he has absolutely no right to even begin discussing or mentioning the word “humanity”.

He says he doesn’t understand “the level of humanity” for people throwing insults at his family, I don’t agree with them but totally understand them, it’s outrage, disgust, anger!

Where is the humanity in a subhumanoid like The Palmerator going out, wounding animals, tracking them while they are in pain and suffering, and finally shooting and killing him with a gun, THEN…. yes there is more…. THEN, skinning their bodies and beheading them to add their lifeless head onto his trophy wall. Hey Palmerator, how has humankind lowered itself to THIS LEVEL OF HUMANITY? Such senseless useless killings 🙁

He says his patients want him back, if you are 1 of those customers, shame on you!

Today I learned of this sick fellow from Texas by the name of Kerry Krottinger. He is a Texas millionaire who built his riches from his Texas oil companies including Primrose Operating Company, Pecos Exporation Company, Nyala Inc, Maple Leaf Petroleum Inc, and Kudu Inc.

Sign the petition here to bring justice to the serial killer Kerry K. 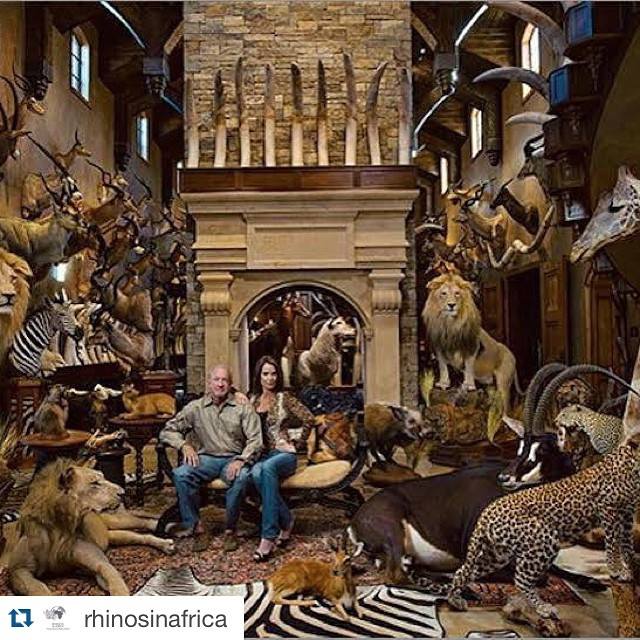 As you can see in the picture above, he loves to murder animals from all over the world. Him and his sick wife Libby are posing proudly in their “chamber of death”. These are real life Bubba “Leatherface” Sawyers. How can they, in 2015, sick minded people like this get away with causing so much torture, pain, and killing all in the name of fun, ego, entertainment?

My letter to you Kerry & Libby the proud trophy hunters…..

AnimalIdeology.com would first wish that you would wakeup, realize what you are doing. Killing is not right, in any case, and no matter how much money you have (unless of course self defence or such matters). If you so called “love Africa” then help the animals & people there by donating to charities to help them. Not going there, murdering and carving up these precious lives. Seek help, seek forgiveness! You both really need it. You are being so creepy that you’re both comparative to Leatherface, Jack the Ripper & Hannibal Lecter! Stop being creeps, please!

I have personally dubbed Sabrina Corgatelli the ditzy “hunter whore”. She is a ditzy American from Idaho who actually has the nerve to publicly stand behind her stance on hunting.

Here are some actual comments she made:

when you hunt an animal everybody just thinks you’re a cold-hearted killer, and it’s not that, and there is a connection with the animal, and just because we hunt them doesnt mean we dont have a respect for them, but giraffes are very dangerous animals, they could hurt you seriously very quickly

1. If you’re not a cold-hearted killer, then what are you? a soft caring killer?

2. If you were being killed for absolutely no reason, hunted, would you hope that your killer has a “connection” with you, and has “respect” for you? I would be pissed as hell if some random person comes along to kill me for the hell of it.

3. Giraffes are dangerous? who gives a shit! Humans are dangerous! Snakes, insects, lions, people are dangerous, what does that even matter in terms of hunting morality? That is one of the most ignorant comments I’ve ever heard when it comes to hunters trying logic to defend their hunting rights.

So, after Sabrina’s comments and actions, she fits well to be “Sabrina Corgatelli – hunter whore” from Idaho.

See the CNN article and viral video about Sabrina and her comments defending her trophy hunting safari’s in Africa here.

Look how proud she is, standing next to her innocent, murdered giraffe. What a coward, loser, and lowlife.

More news about “the hunter whore”: